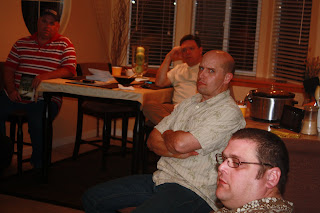 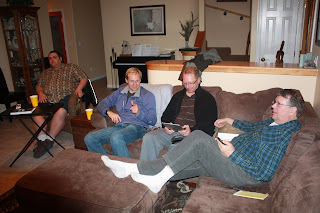 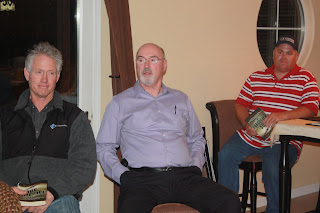 "The sword glitters not because the swordsman set out to make it glitter but because he is fighting for his life and therefore moving it very quickly." -C.S. Lewis

I have to confess, a bit sheepishly, that I did not read the book. My first few attempts to find it failed and the next thing I knew I was in Don's kitchen, eating his chili and wondering if he could tell. In retrospect, though, I picked up on a few things I might otherwise have missed since I was only listening and not preparing to speak (I learned this from Trevor). I noticed an enthusiasm for war stories, war history and any story that involved heroism. We talked about guys with Congressional Medals of Honor and Purple Hearts in shoe boxes. I liked the one about the guy covered in shrapnel wounds who carried a buddy over his shoulder as flames were licking his rear end who does not have a Medal of Honor to put in a box. So what do we gain from these stories? Is it a sense of appreciation, gratitude, admiration? Maybe. But maybe we also feel that we are the heroes of our own stories, that valor means something on our own battlefields, and that there are people who need us to go above and beyond the . I've heard it said that every man believes he is a hero on some level. Maybe that. Or maybe its just fun to get together with some sympathetic dudes and chew the proverbial fat. Either way I'm glad I went.

On the news front, Deep-pit Dinky will soon fulfill the measure of his creation. On Tuesday, the 29th of March, I plan to go with Richard to witness his last moments as honorary Dude Squad member. We plan to serve him up hot at Leo's on the 30th of April around 4 or so. Families are invited and buy-in is $20. Hope to see you all there. Also, the night before, we will be discussing Steve Hamilton's book Michael's Reward by Mario Bernheim, a modern take on the Book of Job. I figure if I can't find this one, at least I know where to find Job.

Gentlemen, its been a pleasure.