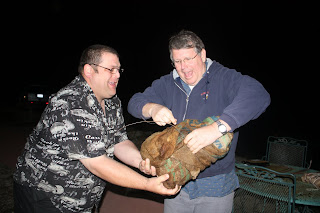 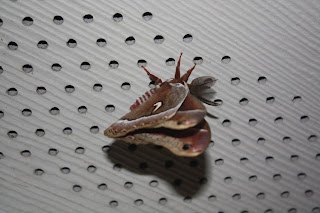 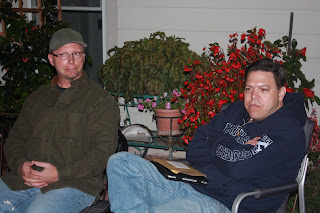 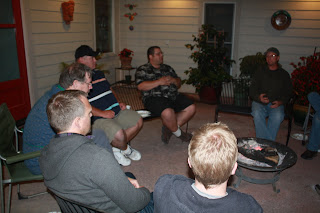 I want to start this one off by extending a big thanks to Steve Hamilton, Leo Bunting and Richard Norman whose combined efforts made this past weekend one to remember. Kicking off the DS festivities on Friday night, Steve was able not only to coax Trevor to comment but also to lure a huge colorful moth to join in. We concluded, after analyzing Job's life, that we may have to go through hell to get to heaven; someone said we may have to make an Abrahamic leap of faith. I'm inclined to hope its all going to be Polish sausage and sauerkraut from here on out, but I've been wrong before.

And that brings me to the Dinky Dinner. We had a tremendous turnout of Dude Squad and kin, great conversation, a royal wedding, scaffolding and a fire for the kids, and a great story shared before we ate. I don't think it could have gone better. We learned that all we have to do to get Jeff Stasell out to an event is raise a pig, slaughter it, store the meat, cook it in a pit, and then organize a little Saturday bash. If only we'd known! All in all, I think everyone had a positive experience and of course, DINKY WAS DELICIOUS! Thank you to everyone who contributed to a great Dude Squad social. We hope to have more in the future.

Now, to clear some confusion and dispel the rumors: I told Scott Silva that he could take my book selection spot after David because I wanted to go in August because my dad will be there then. When David asked for another month, Scott got bumped up to next in line. So my scheming and calculating have gotten us out of order. So to those founding DS members who have been waiting so patiently for your turn, I will make it up to you somehow, someday. Well, Jim, Trevor, Rob, Leo, Billy, Steve, Dave, and Richard, the guys who showed on Friday, I want to thank you for your contributions to the discussion. You are the dudes who ultimately make the difference that makes a difference. So whether you act as Grand Poobah of the railway or fight on the front lines in the war against gingivitis, I salute you.